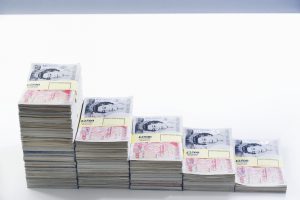 Eagle eyed viewers might have noticed the lack of a viewers competition in recent editions of the ITV game show ‘Who Wants To Be A Millionaire?’.

While the show has been back on air in the evenings during the lock-down months, they’re actually repeats from (mainly) the last series. There were a few very notable contestants winning huge sums of money, including a teacher that hit the (nearly) jackpot with half a million pounds.

There were also plenty of contestants getting to sit in the Millionaire hot seat and collapsing spectacularly. While few ever go home with nothing, it feels like there have been a lot more than normal coming a cropper with a wrong answer before setting and reaching a safety net, meaning their prize falls to a thousand pounds.

The genius modification of rules came about when Jeremy Clarkson took over presenting duties and the second safety net could be set anywhere above the first at £1,000. It’s deceptively difficult to get the placement perfect too, as lifelines can often evaporate rapidly once they start getting played.

Saying no to setting a safety net at £32,000 occurs as the player turns down the chance to walk away with £16,000, so they’ve actually got to answer two more questions after declining to get there, as it takes a correct response to get to £32,000, then choose to set it at £64,000 and answer again correctly to reach the safety point. It seems a good number of contestants don’t realise they’ve pushed things a little too far until it’s (just) too late.

Back on the subject of the Who Wants To Be A Millionaire viewers competitions, it’s now been revealed that filming is under way for a new series, and given the state of the world at the moment, that means no audience due to social distancing requirements.

As a result, there’s going to be no ‘Ask The Audience’ lifeline in the new series, which will be replaced for the immediate future at least with a second ‘Phone A Friend’ in its place. I would say that’s a change that will benefit players who would normally win big, as the audience lifeline is far more likely to split the vote on the harder questions, whereas an extra phone a friend should at least give the player an idea of how likely the nominated recipient is to know what they’re talking about!

Time will of course tell, but it’s likely that we’ll see another prize for the viewers at home when the new series airs, and as the last series gave us a chance to win £125,000 in tax free cash, it would seem logical that the next prize will be equal or greater value, assuming they stick with a cash only prize.